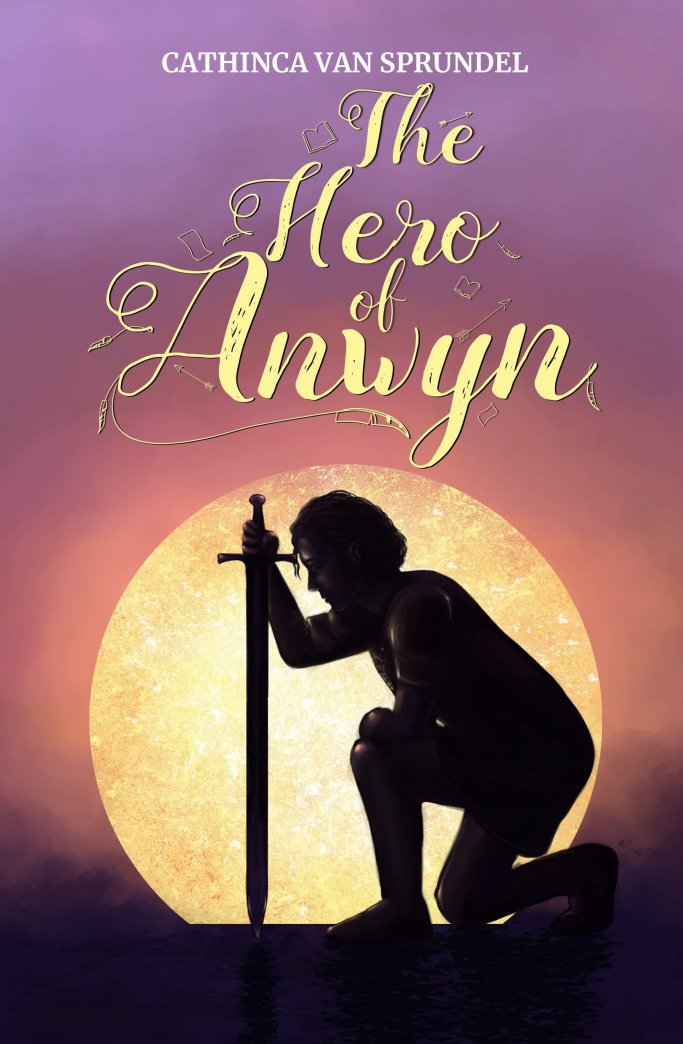 I should never have gone after that white deer. Sadly, I only realised this after I had signed a contract that would change my life forever. In that moment, I was consumed by the hunt and the honour it would bring me.
‘My finest sword belt for the one who catches that deer!’ I called out over the racket of the horses and the hounds.
I heard my brother Evan shout from behind me: ‘And my best knife!’
‘Then you better hurry. You don’t have that many left!’ I yelled back, though I couldn’t be sure if he had heard me. I spurred Alban on and pressed myself flat against his back. This unique prey could not be allowed to escape. Truly, I wished my friends all te best, but I would be the one to take this animal home. I moved my javelin aside and whistled a signal to the hounds. Without thinking, I used my knees to manoeuvre my horse through the undergrowth. Leaves whirled into the air and I ignored the branches clawing at my trousers. My breath and that of my stallion created puffs of cloud, and the cold of the air scorched my throat. The weather had turned. This morning in autumn had come with the promise of warmth and sunshine.
A white flash in the corner of my eye made me sit up straight in the saddle. There! He wouldn’t get away from me. I made my horse turn and had him gain speed. My short hair was sticking to my forehead, and Alban’s fur felt clammy to the touch. Just a little longer. I knew the stag was getting exhausted. The treeline smoothed up the hill into a clearing, and there he stood, in all his glory, frozen, and surrounded by the hounds. His antlers told me he was but a few years old. I could see his heart thumping in his throat, and his lustrous coat, as white as the clouds, sent a mist of sweat into the air. Only by a miracle could he made it this far in life. Nature normally dealt with these types of abnormalities, after all. Oh well – better for it to find its end now, by the tip of my spear, than later in the jaws of a wolf.
Bringing this one home would greatly improve my standing. The animal would serve as a sign of good fortune. I could use some fortune, especially so soon after my father’s death. But where were Evan and the others? Shouldn’t they have caught up with me by now? Well, if they couldn’t keep up with me, that was their problem.
As I pulled back my arm to throw the javelin, another group of hounds suddenly jumped out of the bushes and on to the stag. Within seconds they had seized the deer by the throat and overpowered him. Surprised, I tried to understand what was happening. These sleek, grey animals did not belong to one of my thirteen comrades. Anger took hold of me. I hadn’t chased this beast across hill and dale just to lose it to this strange pack.
‘Get the blazes out of here! That deer is mine!’ I called out as I rode towards them. Alban’s legs and the back of my javelin were enough to drive them off, and they ran away with their tails between their legs.
I dismounted and examined the deer, which was lying on the ground. Those strange hounds had torn into him quite a bit, though I could see that the life in his eyes had not yet faded. I grabbed my long knife and approached. Effortlessly, I avoided the convulsing legs and grabbed the antlers, after which I ended the stag’s suffering. I pressed the knife to the grass to wipe off the blood, and then put it back in its sheath.
‘Thank you for the good hunt, and good luck in the afterlife,’ I muttered the short prayer that my mother had taught me. Skilfully, I cut the head off the animal’s body and put it in a sack that I took from one of my saddlebags. Not much of a trophy, but it would have to do. The rest of the hide was worthless now. I whistled to my hounds and allowed them to have their way with the remainder of the kill.
Now that the hunt had ended, exhaustion overcame me. The cold air still prickled my lungs and I started coughing. I thumped my chest in vain, wheezing, and my throat clenched. I used Alban to keep myself upright and was glad to be alone. I didn’t like it when people saw me like this. In my head, I could hear my mother’s words. ‘Stay calm, this will pass. It always passes.’ Tears burnt behind my eyes and I pulled up my shoulders. Thankfully, the attack didn’t last long. I pricked up my ears in hopes of hearing the hunting horn of my brother or one of my friends. I lacked the strength to blow my own horn.
A rustling in the bushes startled me. One of the grey hounds that I had chased off had come back and stepped into the clearing, his ears flat and his eyes glowing red. Behind him the others of his group appeared, an imposing figure materialising in their midst. If this man was as skilled with a weapon as he was broad and muscular, he would be an incredibly fierce foe. His jet-black hair fell around his broad face like a mane, and the colour matched his short circle beard perfectly. A graceful tattoo ran down from his temple and disappeared under his short-sleeved grey tunic. My hounds, noticing him, perked their ears forward and ran, whining as they went.
‘Hunter,’ the man said with a low, echoing voice. ‘I know who you are, but I won’t greet you.’